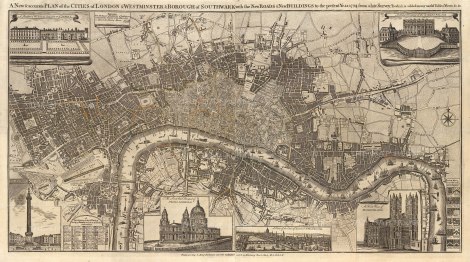 At the beginning of the 19th century the Thames River was much as it had always been – erratic, unruly and navigationally difficult with waters of changeable quality. The port of London was continually gridlocked until a flurry of dock building at the beginning of the century, starting with the West India docks in 1802. Thirty years later when Sir John Reenie and William Mylne presented their findings on the Thames to Parliament, unhampered expansion had compounded the river’s hazards with increasing irregularities in shorelines and widths between banks, as well as considerable variations in depth and velocity. With unfettered growth the Thames would eventually become too dangerous to navigate in some parts, and too slow to be of commercial use in other.

With the rapid growth of London, so too had grown the metropolis’ inability to address effective waste disposable via an ill equipped Thames. This failing would lead to the death of tens of thousands of Londoners from Cholera in the first half of the century as most of Europe was gripped by pandemic after pandemic. Though comparisons were drawn to the Great Plague of 1665, which decimated a quarter of London’s population, conventional attempts to stop its advance were unsuccessful and the spread of the disease was attributed to everything from a conspiracy by the wealthy to eradicate the poor to a travelling miasma or ‘bad air’. Although surveys had indicated location as relevant to outbreaks and it was soon common belief that the filthy Thames was a source, it was not until Dr John Snow’s Cholera Map of 1854 that the culprit would be definitively identified as polluted water. Even then, it would take the Great Stink of 1858 for a remedy to be sought in earnest, and as the engineers considered new solutions so too were revived previous designs. 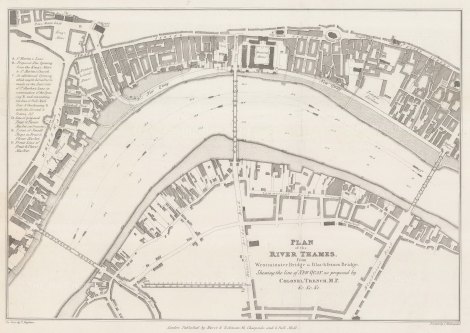 Since the great Fire of 1666 when Sir Christopher Wren first put forward the idea, improving the Thames had been revisited by many but none perhaps with the optimism of Lt Col Sir Frederick Trench. Soldier, politician and son to a wealthy amateur architect, Trench was a great enthusiast of urban improvement and development. When he first drew up his proposal in 1824 Cholera had not arrived in England; his enthusiasm was driven by a belief in the magnificence that the great river should lend to the city rather than by fear of the microorganisms beneath. Trench’s vision was of a river controlled and embellished with commerce and beauty abounding on its banks. He had his designs drafted by the watercolourist Thomas Mann Baynes and published in the relatively new technique of lithography by Charles Joseph Hullmandel. Although he had much support, he had more opposition and his plan could not attract the necessary funding.

Less than twenty years later as Cholera extended its dominion unchecked, Trench continued his press for change but as a more comprehensive response to the ‘existing Evils’ of a neglected river. Trench had seen first-hand the devastation that could be wrought on fit men by disease and incompetence having taken part in the Walcheren campaign of 1809, which concluded as the most disastrous expedition of the Napoleonic Wars. Only 100 or so men were killed in fighting, but more than 4,000 died from a hybrid fever whilst another 10,000 remained ill months onwards. 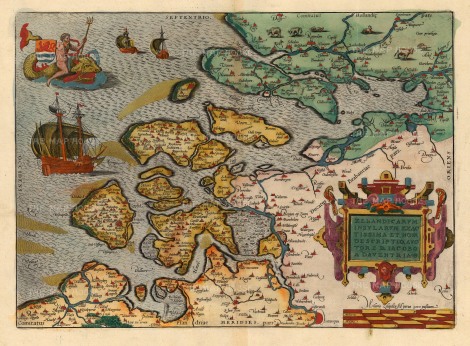 It wasn’t so much that Trench had abandoned his hopes for a Thames reborn, ‘a great Feature of Beauty as well as source of Wealth…the Pride of England and the Admiration of the World’, but that he was not dogged in his vision. In his 1841 proposal sans lithographs, Trench incorporated the findings of Rennie and Mylne with the report by Benjamin Scott and Jasper Firth the following year and the proposals of Dr John Walker in 1840. Placing the importance of drainage and supply over that of navigation, Trench now asserted that embanking was the only means by which to cure the Thames of ‘the Nuisance of unwholesome Effluvia’, giving particular consideration to sewerage improvements as well as an underground railroad to ease congestion.

Trench’s proposal failed again in spite of having considerable support from his previous opposition and  it wouldn’t be until 1858 when the state of the Thames rendered the capital barely habitable that Parliament would be vociferous in its demands for action, by which time Trench had died. Sir Joseph Bazzlegette’s central sewer network and subsequent improvements would eventually reclaim large areas of land from the Thames with grand riverside promenades and imposing walls to contain the river and transform the metropolis much as Trench had dreamt.

In the same year that Trench was working on his first proposal for improving the Thames, Charles Joseph Hullmandel published his treatise The Art of Drawing on Stone, soon to be the essential manual of the new technique of lithography. Hullmandel, a landscape artist, had established himself in Great Marlborough Street in 1818/19 having learnt the process of lithography from its inventor Alois Senefelder. Like Trench, Hullmandel was an enthusiastic advocate of the importance of Beauty for the well-being and success of all levels of society. Maligned initially as a method degrading both art and artists,  Hullmandel would help elevate lithography to an art form, and a desirable method for the ‘diffus(ion) of taste’ and dissemination of artists’ works. Perhaps best known today for his collaboration with the great ornithologist John Gould, the lovely, soft grains of these early examples of his work demonstrate why he would become one of the most influential lithographers of his time.

To see more highlights from our collection, please go to our website – https://prints.themaphouse.com/– or visit us at The Map House, 54 Beauchamp Place, Knightsbridge, SW3 1NY.

For over a century, The Map House has specialized in collecting fine cartographic material. Whether you are planning a visit to our Knightsbridge gallery or are curious about antique maps and prints more generally, we welcome your interest.

Leave a review of your visit.

Crumbs! What an unusual Edwardian novelty globe biscuit tin. 🍪🌍 Produced in 1906 by one of Britain’s most successful biscuit producers, Huntley & Palmer (est 1822), who became one of the biggest producers of cakes and biscuits in the world. One of the reasons for their success was that they were able to pack and ship their goods internationally (at their peak they were delivering to nearly 140 countries!), arriving in decorative and highly collectable keepsake tins like this globe biscuit tin. This was not just a fantastic method to ship and preserve the biscuits, but a marvellous form of advertising. 🌏 Huntley & Palmer are said to have even sent biscuit tins to the South Pole for Captain Scott’s ill-fated Terra Nova Expedition (1910-13) - a discovery of their fruitcake was found in at the 1911-12 Winter Quarters in Cape Adare, Antarctica. At the outbreak of the First World War, their biscuits were included in soldier’s rations but the novelty biscuit tins ceased to be produced as tin was required for the war effort. 🌎 The geography on the terrestrial globe highlights the extent of the British Empire in red. When the lid of the tin is lifted, an inscription "Huntley & Palmers Biscuits, Reading & London" can be read. The globe sits upon four brass ball feet and tilts on an axis similar to that of a globe mounted on a pedestal. An example of this globe biscuit tin resides in the V&A Museum's Ironwork Collection. 🌍 #globes #rare #collection #maps #antique #globe #britishempire #history #biscuits #snacks #mondaymorning #cakeculture
Arrival of new books and globes here at The Map House 🌍📚 Come and peruse for yourself - we are open 10am - 6pm #maps #globes #books #gallery #london #library #antique #vintage #mapping
Happy Valentines Day ❤🌍 to our followers around the World. This rare, extraordinary and very early cordiform world map is by Bernardo Sylvanus. It was originally published in 1511 in Jacob Pentius de Leucho's edition of Ptolemy's "Geographia". It is the first atlas map to show parts of the New World in an edition of this classic text, including the then recent discoveries of "Terra Laboratorus" and "Regalis Domus" by Portuguese explorers Gaspar and Miguel Corte-Real (1501), and an enlarged Cuba and Hispaniola from Columbus' landfall (1492). In Asia, it marks the second appearance of Japan, then "Zampagv", on a world map (the first time being in 1506). 🌏 As well as being one of the earliest heart-shaped projections, it is also a very early example of two colour, wood-cut printing in cartography. 📚 In the legendary reference text on early World maps, Shirley remarks "together with the decorative windheads, zodiacal signs, and distinctive heart-shaped projection, make this a most striking representation". We rather agree! #love #worldmaps #raremaps #maps #antiques #lovemaps