This particular entry into our blog is entitled “The Southern Countries of India from Madrass to Cape Comorin, describing the Routes of The Armies of Colonels Fullarton and Humberston during the Campaigns of 1782, 1783, & 1784. Surveyed by Col. Kelly, Capt. Wersebe and others.” 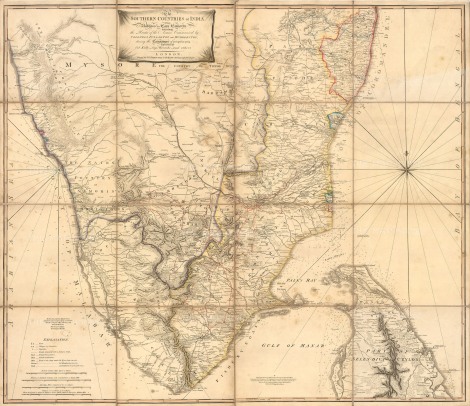 It is a spectacular folding map which illustrates the theatre of a conflict which became known as the Second Anglo-Mysore War featuring the armies of the British East India Company facing the forces of Hyder Ali and his son Tipu Sultan of Mysore. It was printed for William Faden in 1791 and sold at his premises. Faden was a very successful map maker, who took advantage of the public thirst for knowledge about affairs in the far flung corners of the newly burgeoning British Empire and as the Third Anglo-Mysore War was being fought during the period that this map was issued, he was almost certainly taking advantage of the zeitgeist.

Ultimately, there were four Anglo-Mysore Wars and they played a decisive part in the history of India, England and the Napoleonic Wars.

The map features the movements of the main British commanders in the Second Anglo-Mysore War. Sir Eyre Coote was Lieut. General of the British East India Company Forces; a charismatic officer, he was worshipped by his sepoy troops, who called him Coote Bahadur, (Coote the Brave). He had a fine strategic mind and was very aware that the Anglo-Mysore Wars were as much against the French as they were against the Kingdom of Mysore, their main allies in the Carnatic. He defeated Hyder Ali decisively in three separate engagements, The Battle of Porto Novo, the Battle of Polillur and the Battle of Sholinghur, all in 1781. The first was the most significant, where the British, with eight thousand troops, won against a Mysore army numbering forty thousand. Unfortunately, after a typically arduous campaign in 1782, the 56-year old’s health was shattered and he died in Calcutta in 1783.

Ironically, he only survived his great adversary, Hyder Ali, by one year. Ali had died of cancer in 1782.

Coote’s route is marked on the map in blue. 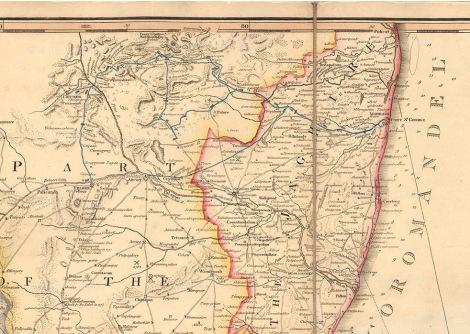 Colonels William Fullarton and Thomas Mackenzie Humberston (also chieftain of the Clan Mackenzie) were very good friends and raised regiments at their own expense in Scotland and Ireland respectively. Initially, these were to be used in a scheme to capture the Acapulco Fleet on the coast of Mexico but the crisis in India necessitated their presence on the sub-continent. Humberston and the Loyal Lincolnshire Regiment (confusingly raised in Ireland) landed on the Western shore in Calicut as a diversion but suffered badly during the campaign; ultimately they had to surrender at the Battle of Bednore. Humberston took a ship to Bombay but was attacked by pirates off the coast; he was wounded and died in Gheria, now Vijaydurg. The regiment was disbanded in 1785.

His route on the map is marked in green. 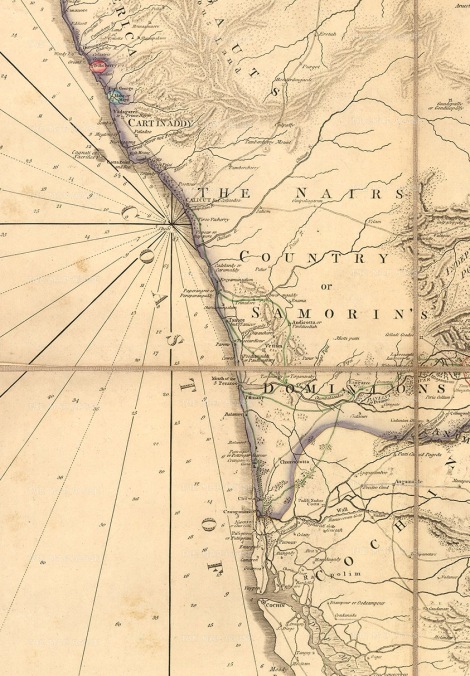 In contrast, Fullarton had a far more successful military career. His regiment landed in Madras and marched South. He campaigned vigorously and his greatest triumphs were the captures of Palghat, now Palakkad and Coimbatore, now Kovai. Following these successes, he was ordered to cease hostilities immediately by the British East India Office in Madras. He returned to England where he became a distinguished Parliamentarian. He died in 1808 of an inflammation of the lungs.

His route on the map is marked in red. 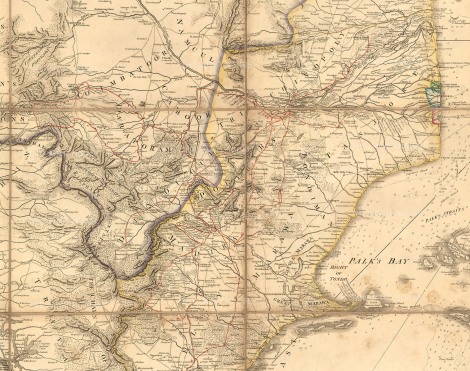 The surveyors on the map are Col. Kelly and Capt. Wersebe. The former is mentioned in several contemporary sources as having a great many surveys of the Carnatic, some of which were used by Coote during his campaign. Capt. the Baron Hermann von Wersebe is mentioned by Major James Rennell, the Surveyor-General of Bengal, as a source for his own cartography. 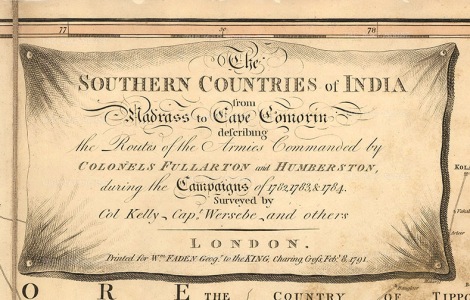 Ultimately, the Second Anglo-Mysore War was not significant in a military sense. Appalled by the cost, both financial and in casualties, East India House in London ordered the British East India Office in Madras to sue for peace with Tipu Sultan; this was achieved by the Treaty of Mangalore, which re-established the geographical status quo as it was before the beginning of hostilities in 1781.

Politically and diplomatically, it was another matter. When Col. William Fullarton returned to the United Kingdom, he wrote “A View of English Interests in India”, published in 1787, bitterly attacking the general policies of the Company. The resolution of the conflict is also regarded as the last time an Indian potentate dealt with the Company on an equal footing and it shattered its aura of invincibility. Above all, it encouraged the French to believe that the British hold on the sub-continent was tenuous and that it could be dislodged. This belief ultimately led to the Fourth and last Anglo-Mysore War in 1799.

Finally, two important historical figures made an early appearance in these Wars: During the Battle of Cuddalore in the Second Anglo-Mysore War, a French fleet made an amphibious landing with marines which attacked and failed to dislodge the besieging English army. Among the French prisoners taken was a young sargeant of marines, Jean Bernadotte. In time, he would rise to become one of Napoleon’s greatest Marshalls and King of Sweden.

In the Fourth Anglo-Mysore War, one of the regiments attacking Tipu Sultan was led by another gifted young officer: Col. Arthur Wellesley, later to become the Duke of Wellington.

For over a century, The Map House has specialized in collecting fine cartographic material. Whether you are planning a visit to our Knightsbridge gallery or are curious about antique maps and prints more generally, we welcome your interest.

Leave a review of your visit.